All about eyeliner tattooing

Eyeliner tattoo was very popular in the 90s and noughties Melbourne.  Only the procedure that appeared on Australia’s territory touched the face of every second girl, but relatively quickly acquired a huge number of myths, unsightly stories about tattooing and fell into the category of “prohibited”.

Are you tired of makeup every day? Makeup takes too long, and is buying good decorative cosmetics hitting your budget? Visit the studio of cosmetic tattoo by Olha Pokatilova – an international master who makes permanent professional makeup in Melbourne using materials proven over the years and premium class.

Eye tattoo is a unique way to highlight and open your sight. It does not blur. Unlike a pencil or eyeliner, it will not erase by an accidental touch of the hand; it will not fail at the most crucial moment in life.

How to tattoo Eyeliner?

In general terms, the procedure carries out as follows: a specialist, most often an experienced artist, introduces a colouring pigment into the uppermost layer of the skin. Tattooing performs using a sterilized vibrating needle that slips into the skin and leaves the dye in the dermis’s upper layers. An experienced artist’s permanent eyeliner tattoo will provide a flawless appearance and bring specific practical benefits. The studio equipped with modern equipment, there is a cozy atmosphere in the office, and the staff does everything to make the client comfortable. The procedure is carried out in compliance with sanitary and hygienic requirements, guaranteeing an impeccable final result.

What will your permanent eyeliner tattoo makeup look like: light translucent shadows, even arrows or a thick lash effect?

The procedure of cosmetic tattoo of eyeliner  carried out with professional, low-traumatic equipment. However, it must be borne in mind that the skin around the eyes is quite thin and delicate, and after the procedure, slight swelling of the eyelids may occur. Do not worry, and the swelling will go away within 2 days. But it is worth considering when planning your affairs after the end of the procedure.

This type of permanent eye makeup involves drawing a contour line along the lash line. The line thickness can be from 1 mm to the ciliary contour’s thickness. Thanks to this method, eyelashes appear thicker, and the look is expressive.

In combination with the outer contour application, the tattoo between the eyelashes allows you to correct the eyes’ shape and enhance the natural effect. 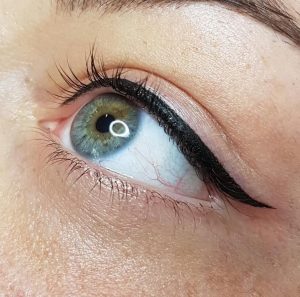 Helps to make the appearance nobler, creating a soft, discreet effect. Shading is also suitable for the upper eyelids. It can complement the classic arrow or use separately.

Clients often choose this type of permanent make-up with mimic wrinkles or sagging eyelids since the traditional dark contour can only emphasize age-related changes.

That kind of eyelid tattoo allows you to forget about the need to bring your eyes every morning for a long term. A line is drawn over the eyelashes. Its thickness may be different, so you should discuss the desired result with the master in advance.The contour, created with the help of permanent eye makeup, will make you irresistible even in those moments when you have just woken up and have not slept enough to go to the beach or the pool.

what effect of eyeLiner Cosmetic tattoo can be obtained

The day before the procedure does not use alcohol, coffee, carbonated energy drinks, black tea, paracetamol, and aspirin to increase blood pressure and thin the blood. If you have eyelash extensions, remove them a few days before the procedure. If you wear contact lenses, take a liquid container for the course as the lenses will need to remove.

Eyeliner tattooing is not performed during the period of acute diseases (for example, conjunctivitis). You can find out about all the contraindications to the procedure on the FAQ page.

Olha Pokatilova is the head of the studio’s cosmetic tattooing school teacher. Also, provides expert seminars for skilled artisans. She uses unique author’s techniques based on years of experience.

Olha has been an amateur for two years before getting into the professional cosmetic tattoo and beauty industry in 2017. She is a specialist with a delicate approach to every element. Her style emphasizes the individuality of each image. You can quickly tell her that she is a creative person who strives for excellence in his work. The motto is an art, a hobby, a profession, and a way of life should be at the same time in your life.

Are you still looking for the right eyeliner, lips tattooing or eyebrow tattoo artist in Melbourne? You are on the right track. Olha is the best artist in this business, and you can call her to make your free consultation.

How much is eyeliner tattoo cost?

HOW MUCH TIME DO WE SPEND ON EYELINER?

Every day, 1,100 girls are looking for an excellent artist eyeliner tattoo in Melbourne, according to statistics from Ahref.com. It would seem, why not do it early in the morning when leaving for work. But our everyday life has become so busy. And no one wants to spend 15-20 minutes on eyeliner each time. And in a year, it’s just nothing 90 hours.

According to scientists from the UK, an average woman spends 91 hours a year applying makeup. Thus, with an average life expectancy of over 70 years, a woman spends 43 weeks on cosmetics alone.

However, the researchers emphasize, these are public figures that differ if we consider women from different countries. Southerners have to spend more time on makeup than northerners. 12% of women living in warm countries spend 45 or more minutes a day just applying cosmetics. Among northerners, only 8% of them. Nearly a third of those surveyed said they would like to reduce their course on makeup. And only 13% dare to go out without any makeup at all. At the same time, 9% would never leave the house without makeup, and 1% put on makeup even before going to the gym. An increasing number of women are using the internet for facials. So, 30% regularly look at their photos on social sites to assess which makeup is worth using and which is not.

HOW MUCH IS EYELINER TATTOO COST IN MELBOURNE AND BRISBANE FACE FIGURATI STUDIO?

The eyeliner tattoo’s average Price is 400 AUD in different Victoria areas. The cost of the eye tattooing procedure depends on the technique you choose. Thinking about how much the eyeliner tattoo costs. Pay attention and consider what materials are in front of you, the equipment used. How qualified the artist is.

Today, Melbourne has become easier to make inexpensive permanent makeup tattooing of eyeliner. Compared to when it was just inception. Prices have become more democratic, and the service is affordable and widespread. For example, choosing only a tattoo lash line costs you 349 AUD in our Face Figurati studio. Traditional eyeliner tattoo at the moment only 399 Aud. See all cosmetic tattoo prices.

I hope we have developed the correct answer about the Price of tattooing. If we take the 249 AUD eyeliner tattoo cost, it will last over 18 months and divide it 30 days a month. Will get the Price of 0.46 AUD of how much cost looks perfect each day. Add how much time you spend on eyeliner instead of having a cup of coffee in the early morning. We hope to see you in our studio and change your life to better da spending.

Eyeliners are the most prevalent eye tattoo technique. They can be classic or shaded, lashline or another name eyelash tattooing.

What most popular cosmetic tattoo techniques?